This is a sample page for free members. This is todays actual seasonal outlook for Adelaide, for the next 9 months,  issued around the 25th of each month.

The outlook goes out 9 months, and gives a comprehensive wrap up of how things are likely to play out, and also how things line up downstream of that. Every district in Australia is covered for members, if your district is not there when you join,  it will be uploaded on the same day.

This is part of the Gold and Platinum Member package, you can subscribe on the membership page.

Welcome the new seasonal outlook for October 2018. In this update, we see the first look at the first half of 2019, and also a closer look at what the rest of 2018 holds. We currently see the atmosphere totally disconnected with Sea Surface Temperatures, presenting new challenges to long term forecasts. At the present time we are as neutral as can be, and the pattern has been one that has barely moved in the last 3 months.  We now are seeing some major climate drivers starting to become active, and this should produce a forcing that will mean some rain returns to Australia over the rest of 2018.

Currently, we have a very neutral set up, both in the Pacific Ocean and also in the Indian Ocean.  It is likely to stay this way for the 9 month forecast,  the only possibility is a slim chance that we could see an El Nino later this year, however at this stage it is clinically dead. Even if one is declared by the numbers, it will not be a real event as the atmosphere is now in a La Nina pattern. The Madden Julian Oscillation is stuck in Phase 8 and 1, and will slowly move West  in the first two weeks of November, and create lower pressure to our NW, this will strengthen the trade winds dramatically in the weeks ahead. This should be enough to see rain events increase around the Maritime Continent, and warm the water near Australia, and cooler the Pacific Ocean further. 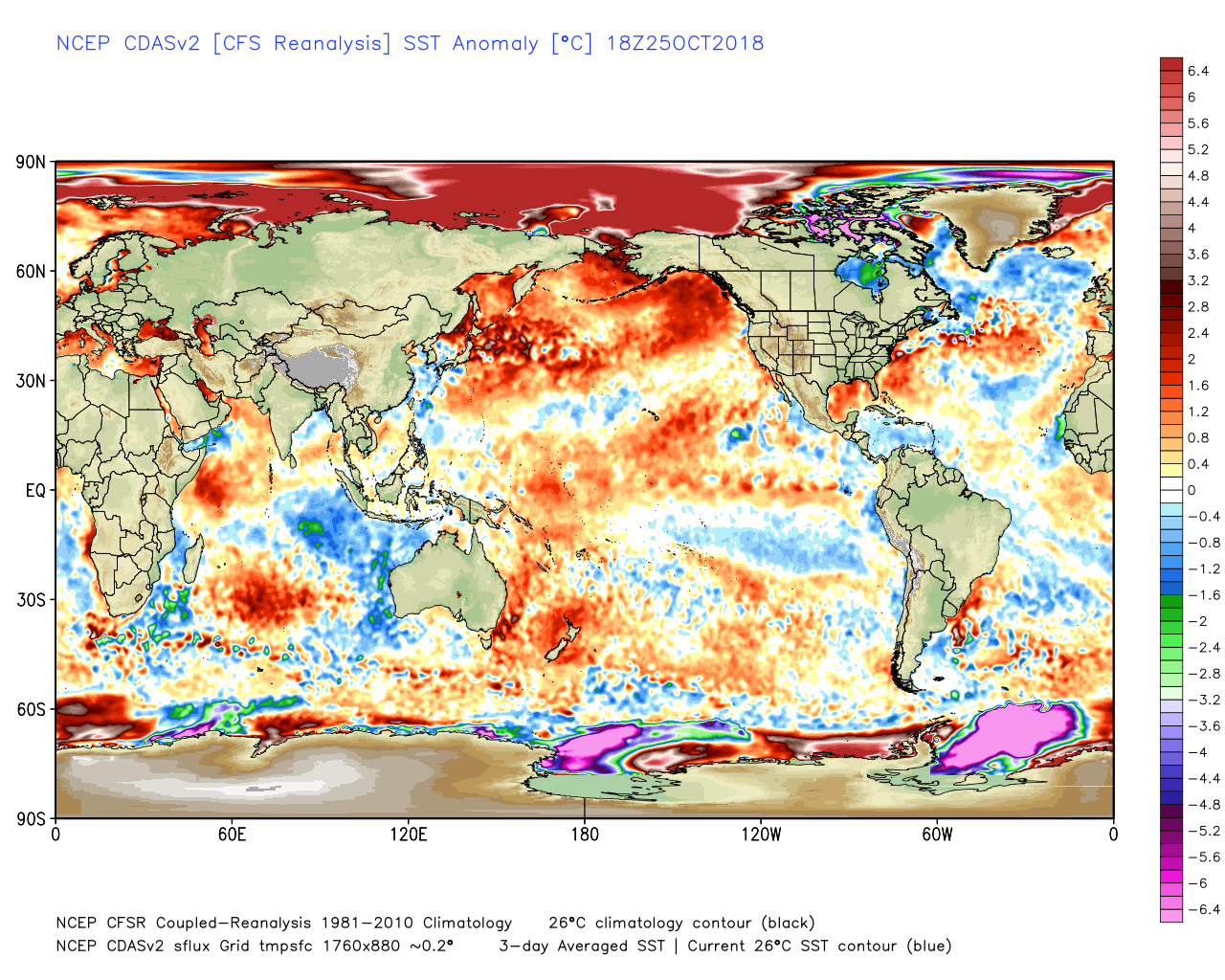 Current SSTs shows the neutral pattern still holding, warmer waters in the Pacific, and cooling waters in the Nino 1 and 2 regions. This is allowing the trade winds to remain strong and cool the Eastern Pacific even further. We currently have an El Nino set up in the Pacific, however the atmosphere is refusing to connect to make this happen. We have a lot of warming in the Western Pacific, this is typical of a La Nina coming on. And this is causing the water temperatures to change every week, we have gone from a cool Indian Ocean, to a warm Indian ocean, and now its cooled again near the West Coast due to low level Easterly winds. I tend not to focus too much on the daily changes, they vary wildly due to the low level winds. The Indian Ocean Dipole is weak positive, and its impact is starting to wane as the MJO will be moving into Phase 2 within a fortnight, that cancels out the IOD as a driver. 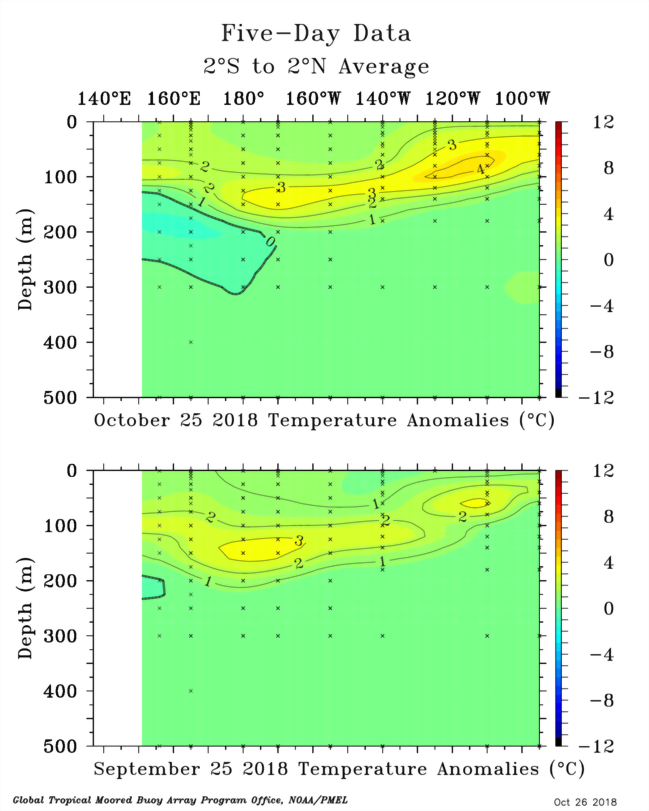 We have seen some movement in the last month in the subsurface, the warm Kelvin Wave has flattened out to lay in the subsurface and is now starting to push into the Eastern Pacific. Despite this warmth, it is being cooled by cooling water coming up out of the Humboldt current along the coast of South America. There is cold water sitting in the Western Pacific underneath this warm water, and once the trades winds start to pick up in early November, it will drag this colder water more aggressively into the central Pacific subsurface. 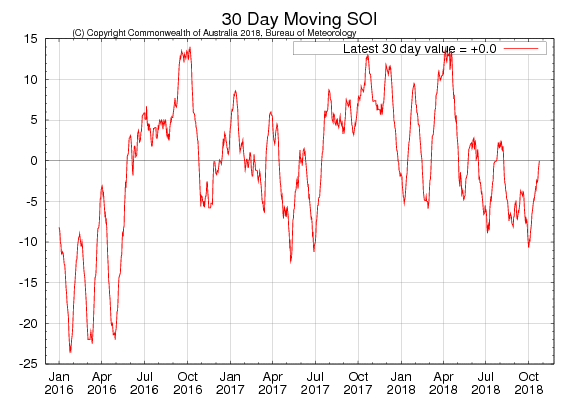 The Southern Oscillation Index has continued the roller coaster, the 30 day average is now back to zero and a neutral atmosphere continues. For an El Nino to develop, May is the month where you need consistent negatives in big numbers, and then that continues right through Winter, and that did not happen. So the atmosphere refuses to connect and that counts out an El Nino that will affect our weather, regardless of what the oceans evolve into in the next few months, the neutral pattern is now locked in. 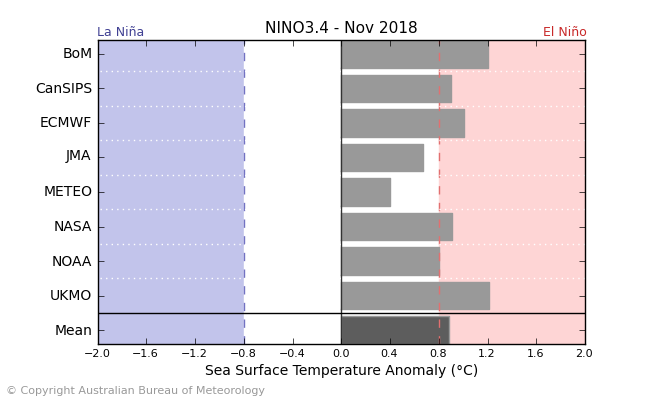 Looking at the ENSO forecasts, both the BOM and the UKMET model have the temperatures at 1.2c in the Pacific by November, which is only days away, and the Nino 3.4 ready is around 0.55c at this stage, and steady. So most of the models have misread the situation, assuming westerly winds will increase and surfacing the warm water underneath. Only Meteo France is close to being accurate, the remainder are too heavily biased to the warm side. 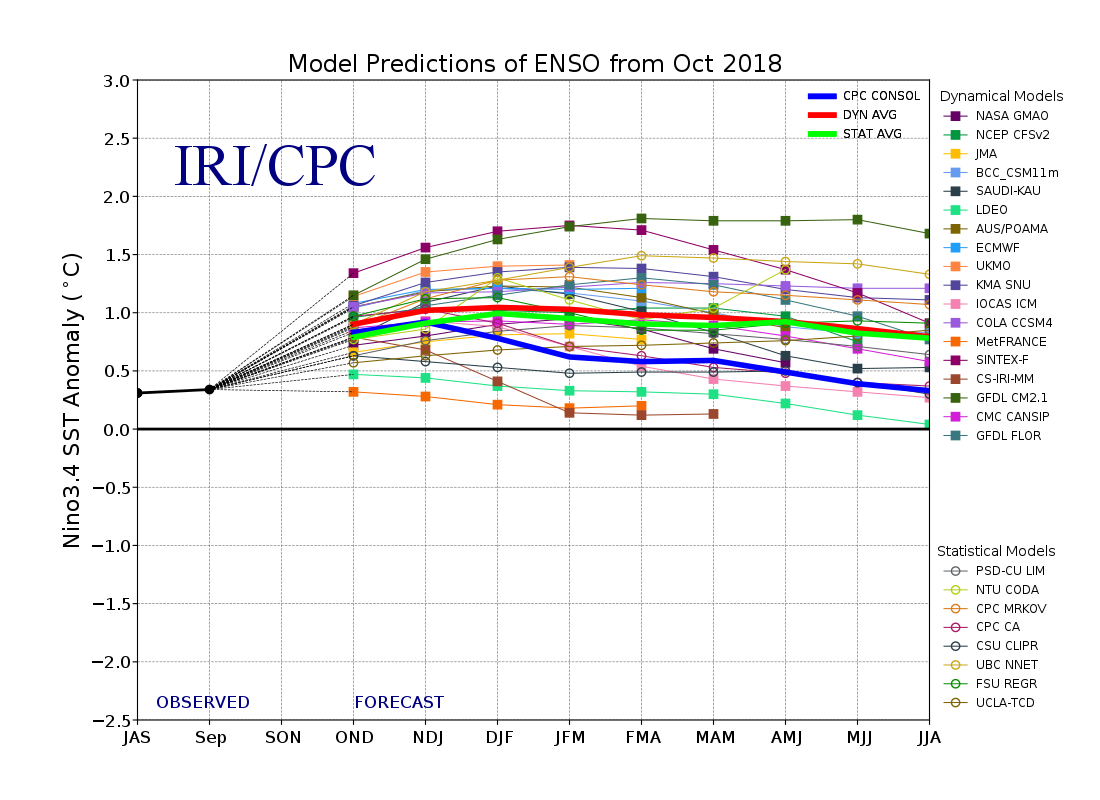 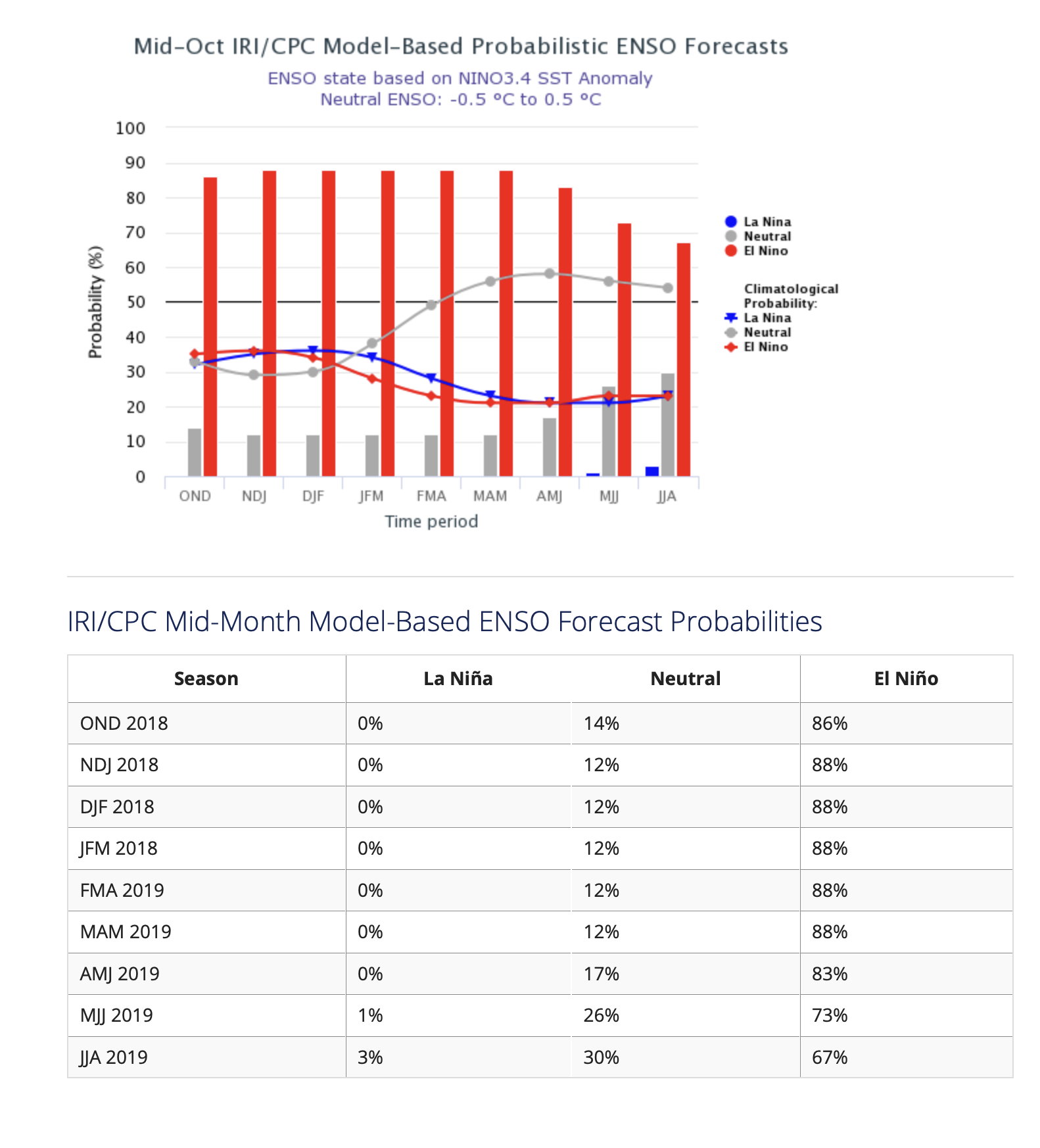 The percentages are now 88% El Nino, and 12% neutral, so virtually all bar two of the models think and El Nino developing is imminent. As discussed many times in recent months, this is irrelevant now in regards to our short term rainfall of the next 6 months. 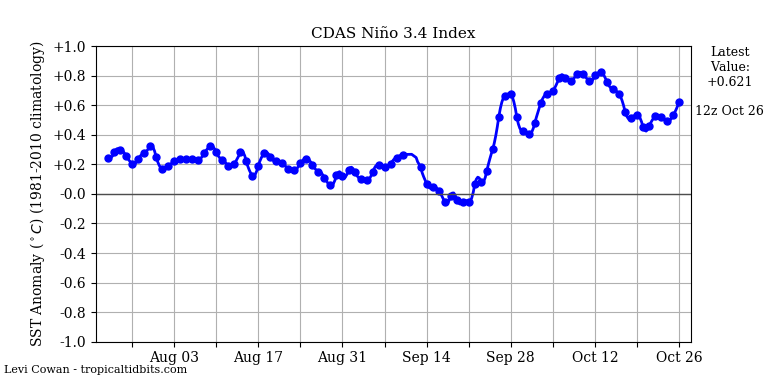 Looking at the central Pacific, the temperatures in the Nino 3.4 region have spiked due to weaker trade winds in late September and for the first half of October. . Over the last two weeks, the trades have strengthened in the Central Pacific, and the temperatures have quickly fallen, and remain steady at 0.5c region. This next fortnight will see the strongest trade wind burst since 2016/17, and that will cool Nino 3.4 further. Given the temps need to be above 0.5c for 90 days or longer, an El Nino is very unlikely, but not impossible. 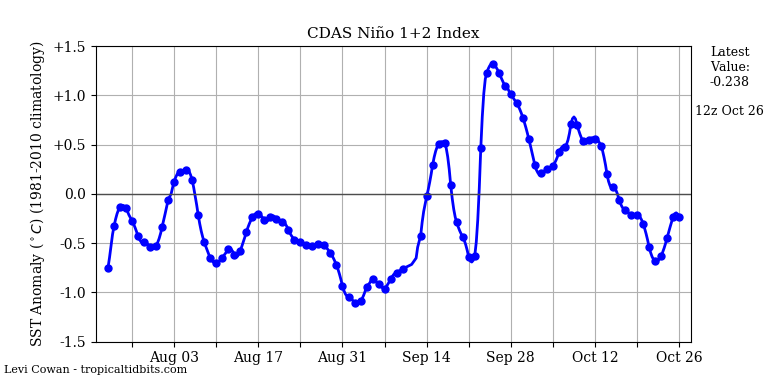 The game changer is Nino 1 and 2, we have seen a bit drop off since late September, this is because the winds strengthened up the South American coast and started to drag cold water into the subsurface, cooling the warm water as it surfaced out of the Central Pacific. If this continues, the trend for cooling will start to increase.

The Madden Julian Oscillation is always an important driver, but its never been more important than it will be in the next 6 months. If you look at this diagram above, in the last 5 weeks it has been hanging around Phase 8, 1 and then Phase 2, and then doing a loop and staying positioned near Africa. This means there has been little forcing on the climate, given the lower pressure has tended to stay in one spot. As it did last month, it is now forecast to come out of Phase 8 and move around towards Phase 2 and 3. A move like this will have massive implications, it will turn the global wind oscillation patterns around and start to induce a stronger La Nina atmosphere than we already have. So this is going too be the key component to set up our summer rainfall, and then also maintaining it by not going around into Phase 6 and 7.

The Antarctic Oscillation is now bang on neutral, and this is perfectly placed, We don’t want this to be too have to the negative side, whilst that promotes stronger cold fronts, it also increases the risk of drier air sitting over Australia, reducing rainfall. A neutral pattern allows a balance, enough cooler air to kick off upper troughs, and enough moisture that can push down over the country from are North. And this indicator is likely to remain neutral to slightly positive in the next 4 weeks.

So to summarise the current situation, the SST pattern still remains El Nino like, and the atmosphere is now La Nina like.  Whilst the fight between the two opposing forces has managed to keep Australia very dry this year, those days are numbered as much better rainfall patterns are starting to set up over the country. And because we don’t have a La Nina, we are unlikely to see months and months of heavy rainfall, we are more likely to see thundery rain and storms events, with 1 or maybe 2 months of well above average rainfall for Eastern Australia, this will be refined in the next update by the end of November, when the set up will become much clearer.

Generally, the outlook for South Australia is for average rainfall in the months ahead. Rainfall is likely to be near average everywhere, with the NW Pastoral district the region that is likely to see the heaviest falls. I do think we will see most of the state receive average rainfall, the inland will no longer be marginal, as through November rain should increase through inland districts of SA.  Temperatures may be warmer than normal during the day, and minimum temperatures may start to become normal after a much colder than normal Spring. November is likely to be the month we transition into much better moisture at all levels, allowing much better systems of rain to develop, but the heaviest rain is likely in December and January. 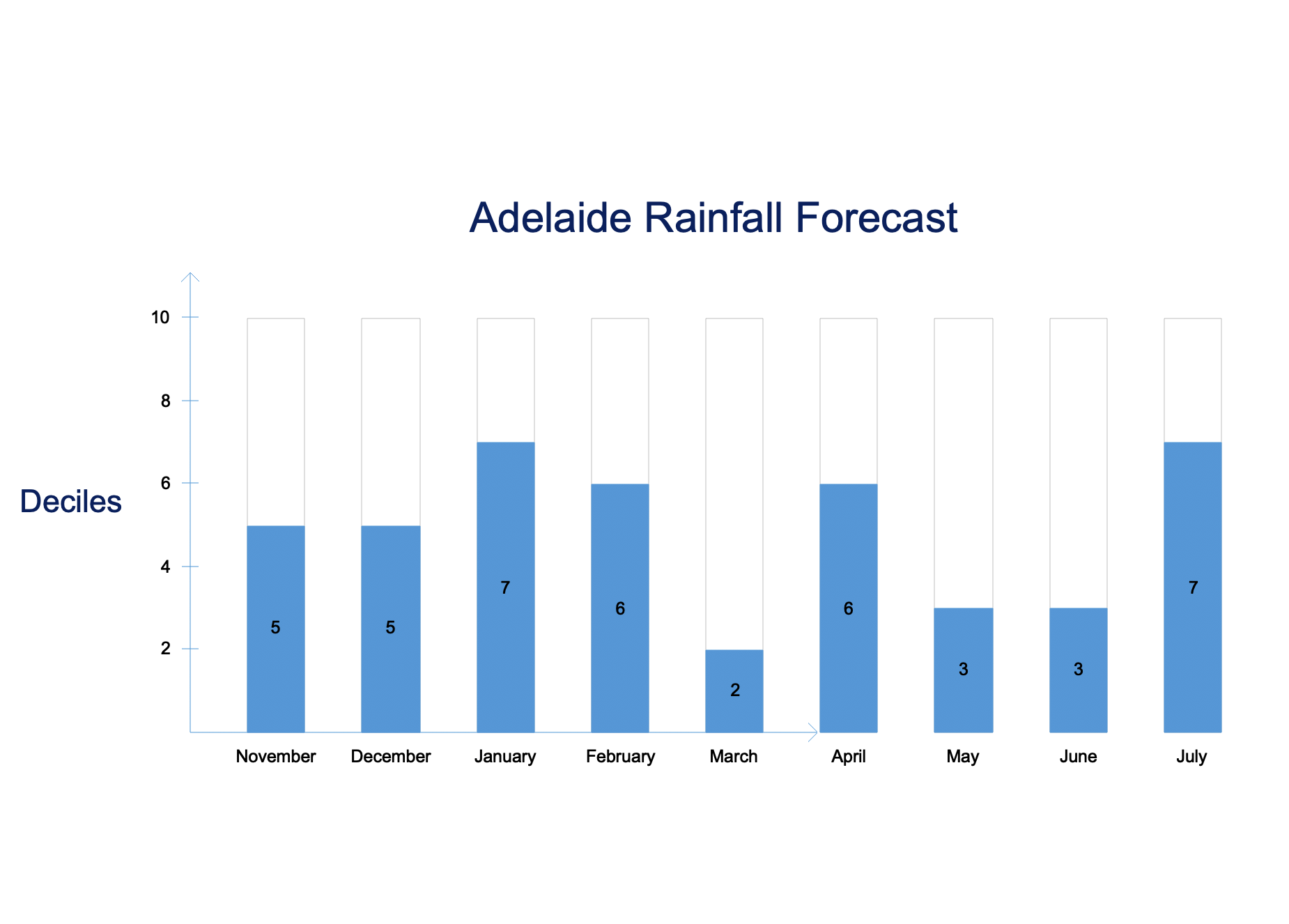 Notes : With the decile scale, a decile 6 would imply slightly to the wetter side of average, and 4 would imply a slightly drier bias to the forecast.

Disclaimer : This forecast is the intellectual property of A.V. Weather, and isn’t to be redistributed online without my written consent. This is a long range forecast and is to be used as a guide only only, A.V. Weather will under no circumstances be held responsible for any loss incurred from this outlook, which has lower forecast accuracy than a normal forecast. If you any issues, please use this form to contact me. https://avweather.net/contact-us/